You didn’t follow through the way you wanted, you ate something you regret, you said something you wish you could take back, And now your inner critic is giving you hell for it. This very common pattern of ‘beating yourself up,’ happens to even the seemingly-strongest people we know. Beating yourself up isn’t exclusive to regret – that same inner critic berates the actions you take, too. Could it have been done sooner, fa 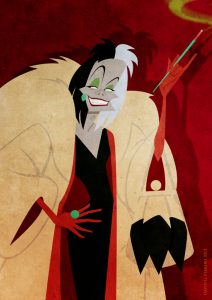 The inner critic takes great delight in pummeling us, both mentally and emotionally, for any transgression in the ‘not good enough’ category. Most of us tolerate that character because it has convinced us that without that relentless presence, we won’t get anything done; we’ll become “lazy,” or “selfish,” or an aimless bum. Yet when I ask people if the voice makes them more or less likely to take action, more or less confident, or more or less likely to take on the next challenge, the answer is always LESS.

Listening to that voice has the opposite effect of what we really need. I’ve taken to calling my version of that voice Cruella De Vil. That name might be familiar to you; she is the villain in “101 Dalmatians.” Here’s a partial Wiki description of Cruella: evil, sarcastic, ambitious, rude, reckless, obnoxious. I think of allowing Cruella’s voice to continue to chatter away at me as taking emotional Draino. It will erode my self-esteem, confidence, and motivation: the very things that I most need to take empowered action in my life. What impact does beating yourself up have on you? Get honest with yourself about this, since none of us can afford to take emotional Draino.

So what do we do when your Cruella starts beating you up? My suggestion is to

C – CATCH it. You can’t stop Cruella unless you notice that she’s trying to take over. C can also stand for having COMPASSION for yourself. Cruella’s egotistical tyrade doesn’t allow compassion for anyone.  C does NOT stand for Cruella’s CRITICISM!

A – ACKNOWLEDGE yourself and your efforts, good intentions, or life conditions that prevent you from taking the actions you want. ACCEPT where you are right now from the perspective of possibility, not criticism. Cruella doesn’t acknowledge any positive feedback. A does NOT stand for Cruella’s ACCUSATIONS.

R – REAFFIRM your intentions, your strengths, your progress to date. REENERGIZE your commitment to take action by identifying a REASONABLE plan to take action. R does not stand for Cruella’s REPROACH for everything you’ve done.

E = EMPOWER yourself by remembering how truly capable and powerful you are. ENERGIZE yourself by taking care of your body and mind, and where appropriate, ENLIST the support of others to ENCOURAGE you. Cruella holds you accountable for everything, even if you have no control. E does NOT stand for Cruella’s ENSLAVING and EMBITTERED accusations.

Once I gave a name and an image to my Cruella, it became easier to dismiss her as a disruptive, unproductive force. Notice your version of Cruella. What does s/he say to you? How does that make you feel? And what is the result of listening to the voice that is beating you up? If it’s not serving you, see what happens when you CARE for yourself instead.