Overwhelm: A Matter of Perspective!!

Stephen Hawking, who passed away on March 14, was an inspiration in many ways. He was a prolific mind and spirit who just never gave up. Diagnosed with ALS at the age of 21, doctors told Hawking he would not live to see his 25th birthday. He lived to the ripe age of 76! And even with the vast limitation that ALS presents, Hawking continued to do incredible things with his life: he was a professor of physics and cosmology for over 30 years at the University of Cambridge,  communicating through a computer attached to his wheelchair. His physical limitations would overwhelm any of us, but his mental attitude and resilience allowed him to write books, publish papers, and travel the world as an expert in black holes. 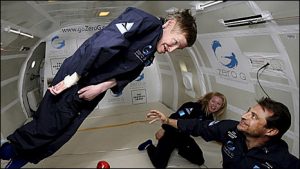 e performed yet another unthinkable feat: he experienced zero gravity. Peter Diamondis, a pioneer with a specially designed plane to simulate weightlessness, offered to fulfill Hawkings’ wish to fly in space – or as close as possible. When the Federal Aviation Administration heard of the planned event, they tried to block the flight with Hawking. Once again, most of us would be overwhelmed by the steps required to pull off such a feat. But, Diamondis would not be deterred, and describef the event as a huge success. It went so well, Hawking was able to “fly” eight different times for a minute each time..

There were hundreds of obstacles and reasons why Hawking should have been limited by his physical handicaps, and dozens of obstacles to prevent Hawking from “flying” in space as he dreamed. But rather than overwhelm, these brave men stayed focused on what was to be gained by taking the risks and putting in the effort.

What is a dream or goal in your life that you’ve put aside because it seems too hard, or you don’t know how, or it’s too overwhelming? What if you brought Hawking’s and Diamondis’ fortitude and resilience to make it happen?

For more information about the life and accomplishments of Stephen Hawking, visit his Wikipedia page here: https://en.wikipedia.org/wiki/Stephen_Hawking.